Mallory Edens, who officially has more fans than the Bucks right now, also has a talent for forming words with her tempting mouth, lips, and tongue. Take her succinct analysis of the draft pick situation quoted above as she revealed it to the press. Mallory was not only really nervous, but also extremely nervous. Some teens would have simply employed "really" four times in two short sentences, but not Miss Edens. She reiterates her point by repeating the term "nervous" so that the audience can fully grasp how she felt. However, Mallory also exhibits a joie de vie that has endeered her (forgive the pun) to bucks fans who are talking more about white tail and racks than ever before on discussion forums. Not only is she really happy, but she also really had fun. What a girl and what a wordsmith!

The Bucks, who really had a good chance to get the first pick, were extremely disappointed in slipping to second, but they were really nervous they might slip to fourth, so, in the end, they were really happy. "We really think we might have an extremely fun season," said John Hammond.

Mallory's father and speech coach had this to say: "We’re very excited to be here, and to be here with my family and our friends is really special. We’re happy with the outcome." Mr. Edens reminds us quite passionately that you do not really have to be a US senator in order to find the very right words. All in all, it appears that the Edens family is really happy.

Oh yeah, here's a picture of Mallory. Brains and beauty. Surely, the Bucks are in good hands. 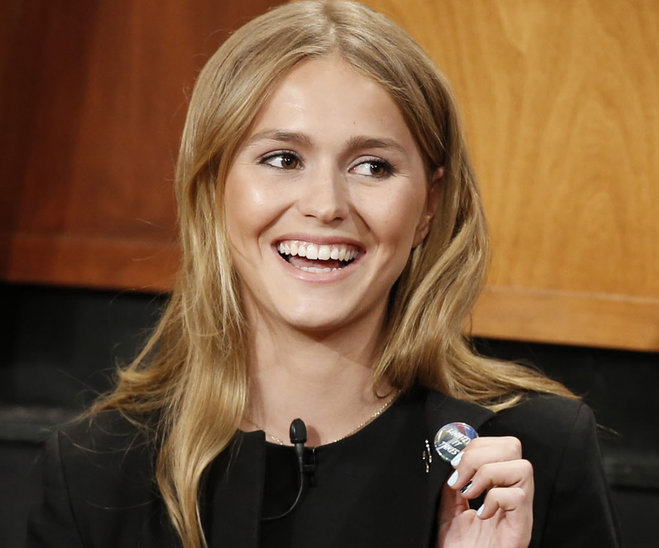 Want something even hotter?

Wednesday, September 14, 2016 5403
I had a customer the other day say H-Vac instead of H-V-A-C. What a moron! Those of us in the industry know that it's right to say each individual letter in the word, and it makes a difference. If I was an H-Vac guy, I'd be selling vacuum cleaners, but I'm installing heating, ventilation, and air-conditioning, not hepa vacuums, so people just have to recognize what I am doing and why it makes sense to use my real title. It would be like if you called your doctor Doc. No doctor wants to be a doc, unless he's in a MASH unit or something. It makes him seem like he's a computer document rather than a fully-trained doctor. Or, maybe you want to call your president Pres or your mayor May. Pres Obama or May Barrett. That's dumb. Do you say you have an It department at work, or is it I-T? It's I-T, folks. Leave the acronym-as-words for Europeans and Socialists, like NATO or NAFTA or INFORSE.
Read More...

Saturday, October 20, 2007 19581
An 18-year-old student was taken into protective custody Oct. 10 after he caused a disturbance with Sandburg Hall staff. The man used profanities, was uncooperative, staggered and slurred his words. He also removed a condom from his pocket and started to eat it, telling staff members to leave him alone. That's probably when staff members really should leave him alone
Read More...