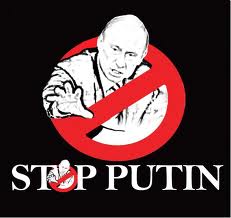 The thematic meaning behind the Stop Putin signs matching Ghostbusters signs might be lost on most Americans, but Real Wisconsin News has investigated the similarities in order to analyze the reasoning for the similarities.

To begin, Putin is Russian, and it has been widely documented that Russians are very pale. Ghosts have also been associated with pale/glowing/translucent "skin."

In addition, the ghost's obvious resemblance to a KKK member allows for a similar, racist interpretation of Putin. He is haunting the Ukrainian people, but he is also racist and attacking them because of this racism.

The red is meant to signify communism in both images. Russia, while not officially communist, is still pretty much communist. While ghosts themselves may not have political affiliations, anti-communist sentiment was high in 1980s America, which explains the original movie image.

Another similarity is the positioning of at least one of the hands. Since Putin's other hand was severed in an unfortunate ham-slicing accident, it would not be appropriate for him to have both hands up like the ghost. Putin's hand is also in more of a "Stop, Hammer Time" position rather than a ghost with his hands in the proton pack kind of position, meant to portray Putin as the aggressor rather than the other way around.

The song tie-in also plays a major role in the sign similarities. "Who you gonna call? Ghostbusters!" is the memorable chorus to the original song by Ray Parker Jr. With the new song, also recorded by Ray Parker Jr. and also packaged with a music video featuring B-list celebs, has the lines, "What we gonna do? Stop Putin!"

Thursday, January 03, 2008 5130
Dear Biker Chick Recently my boyfriend tried to stick his brat between my buns. I was not too happy as he didn't even ask and there wasn't enough space between the buns to get that meat in there, if you know what I mean. Also, it was a dry sandwhich which complicated things. Anyway, I bucked him like a bike with too much weight to the back on a quick start and knocked him off the bed. Now he's mad at me even though I'm willing to give it another try. What should I do to get him back in the saddle? Signed Dirt Rhoda Well Dirt, you did the right thing showing him who the boss is. It's one thing to take liberties when you're somewhat expecting it, butt a surprise attack on the rear flank during a dry spell is ruthless. Let him know how you feel by grabbing his brat again and dragging him back to the bedroom by it. Make sure there is ample lubrication for your chassis on the bedstand and tell him to take off his pants. Now here's where you have a decision to make. You can either nibble on this brat a little and with a wet finger play with his inner buns to help him understand the proper mechanics, or you can just stick your buns up in the air and hope he figures it out. I'd recommend the former as most men aren't smart enough or patient enough to figure it out without a little demonstartion first. Also, putting the brat in your mouth a bit will make him forgive and forget anything he's irritated with you for, even though he clearly deserved being bucked.
Read More...

Are you an Athlete???