Hurley – Local man, Oly Oakwood, has been setting “traps” around the local woods and caves of the greater Hurley, Wisconsin countryside since September 11th in hopes of capturing the elusive fugitive Osama bin Laden. Upon receiving word of his death in Pakistan, Oly was taken aback by the news, as he hoped to be the one to collect the $25 million reward that was posted for his capture or demise.

Oly presented his logic to this reporter as we sat on the front porch of his one bedroom house setback about 2 miles down a dirt road. “If ever I needed to get away from some troubles, I’d head out here as it’s the place to be. Heck look at Dillinger when he was run’n from the law…he came to Northern Wisconsin and hid out.” Oly set out after that fateful day in September to be the one to get Osama. His weapon of choice was a con-a-bear baited with adult literature as he said he read that this was a commonly found item in terrorist homes when raided.

Going out into the woods Oly showed off these “traps of his” which consisted of a steel jawed trap with a magazine (in plastic) in a 5-gallon bucket. Oly admitted that these traps hadn’t even “caught coon nor rabbit in them, let alone a terrorist.” He said that he stills holds out hope that maybe someday his traps will produce a “big payday,” until then he plans on relying on his “shine making skills” to support his love of the Hurley nightlife.

After meeting with Oly a stop at Spyder’s, a local watering hole in Hurley, provided a different perspective of Oly’s plan as Arnie Landbreakowski said that Oly spent most of his time checking out the northern portion of Silver Street instead of his so-called “traps.” Arnie said that Oly was a “jack of all trades” while being a “master of none of them.”

While most of the action surrounding terror can be found half a world away we are still able to see that people on the home front are keeping a watchful eye on things. This should help us to sleep better knowing that a person like Oly is out there to have our back if things go awry. 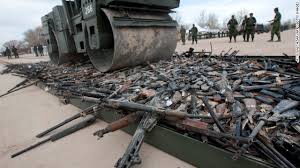 Sunday, August 05, 2007 50068
The Milwaukee Gun Buyback Program has done little to stop violent crimes in the city, so some in the community are suggesting alternatives that may result in a safer city without having to pay people to go and steal guns. The program has paid up to $150 for handguns and sawed-off shotguns, and while a few hundred guns have been taken off the streets, critics maintain that the system is flawed. The main reason why gun buyback programs do not work, they maintain, is because there are simply too many guns in the United States. In fact, nearly eight million guns are sold yearly (legally), and people in the US own 200 - 250 million guns.
Read More...